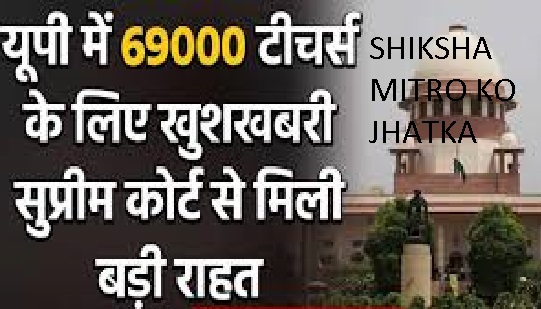 New Delhi | A big blow  for all shiksha mitra regarding Uttar Pradesh 69K assistant teachers recruitments 2019. A long fight of Shiksha Mitra end today when Supreme court verdict in favour of UP government after keep alive Allahabad HC decision. Today on 18th September 2020 Supreme Court dismissed all appeals by the Shiksha Mitra. Supreme Court rejected their contention regarding cut off set by UP government 65% for Genral category and 60% for other category. Latest news UP 69000 TEACHER SUPREME COURT VERDICT here.

A Supreme Court bench headed by Justice UU Lalit gave the judgment in the 69,000 assistant teachers (Shiksha Mitra) recruitment case of 2019 and said “We have recorded the submission of UP govt that Shiksha Mitras would be given another chance  in the next selection process. Appeals of all Shiksha Mitras dismissed and all contentions rejected”.

Allahabad high court also gave the verdict in the favour of UP government to give joining on the basis of 65% and 60% cut off marks. The court’s order came on the batch of pleas challenging Allahabad HC decision to keep cut off marks for selection of assistant basic teachers in UP. A total of 69,000 assistant teachers or Shiksha Mitras will be recruited in schools under the Uttar Pradesh government through this examination

Of the 69,000 vacancies, 37,000 posts have been kept for the Shiksha Mitras, who are WORKING AS ASSSISTANT TEACHER IN UP GOVERNMENT SCHOOLS ON ADHOC BASIS on the order of the top court in June 2020. Today, On 18TH September 2020, the Supreme Court said that the Shiksha Mitras will not get any relaxation in the cut-off marks 69k recruitments.

Actually cut off marks not mention in the recruitment advertisement notification.The cut-off marks decided after the examination, 65 for candidates belonging to general category and 60 for those from the reserved categories. There was also no relaxation for shiksha mitra as promised by various state leaders That’s why Shiksha mitra file a plea in Allahabad high court saying that job notification did not intimate anything on the cut off mark and mentioned about the total marks only. This was challenged by petitioners in January 2019.

In May 2020, the Lucknow Bench of Allahabad High Court verdict in favour of the UP government and allowed up govt. to continue the primary level assistant teacher recruitment process according to the cut-off marks set by the government. The HC  also asked the Uttar Pradesh Basic Education Board to complete the recruitment process in three months.

The Uttar Pradesh Assistant Teacher recruitment examination was conducted BY UP BASISC EDUCATION DEPARTMENT in January 2019 and the result announce in May 2020. After the results, few students challenged that cut-off criteria and the recruitment process.

Uttar Pradesh Basic Education Board (UPBEB), announced result on 12 May 2020. UPBEB had released the result of Assistant Teacher Recruitment Exam 2020 on its official website. A total number of 146060 candidates have qualified in the exam and approximately 3 lakhs candidates appeared in ATR Exanimation conducted 06 January 2020. on 01 June 2020, UPBEB has uploaded the final merit list of the candidates are going to appear for counselling round. The counselling round would be held from 03 June to 06 June 2020

Candidates who have appeared in the exam can download UP 69000 Shikshak Bharti Result using  their Roll Number and a security code on the official website atrexam.upsdc.gov.in. UP 69000 Teacher Link is also given below.