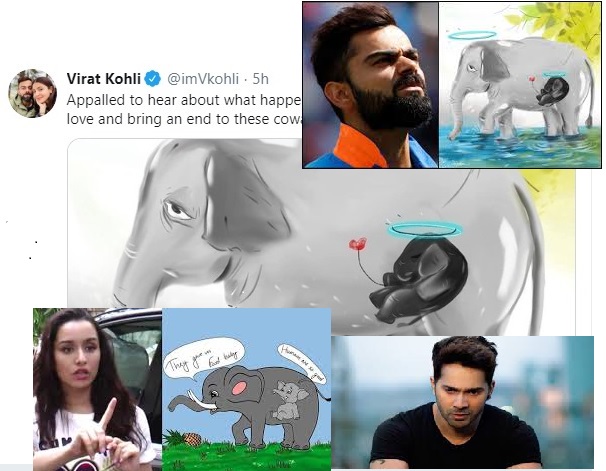 Once again a cruel nature of human is out. A pregnant elephant feed with crackers filled pineapple. cracker exploded in elephant mouth and she died. someone share this story Kerala pregnant elephant died by crackers on social media and got viral. after this news cricketers, Bollywood stars and politician show their anger and demanding justice for innocent pregnant female elephant.

This story start with a hungry 15 years old elephant entered into the village of malappuram, kerala in the search of food. But she do not know trust on human would be so costly. as she was just 15 year old and not so experienced with human nature. some culprit empty a pineapple and filled it with crackers and serve it to hungry pregnant elephant. she eaten the pineapple but it exploded into her mouth and elephant injured badly. One think is noticeable, she run away village and did not harm any person. due to fire in her mouth and stomach, she enter into near by periyar river for some relief. she was injured so badly, could eat anything for next seven days and remain in river. Then forest officer came try to save her life but they could not save her. she succumbed to injuries.

When doctor did her postmortem and a sad news came, she was pregnant. This news shared on social media by a doctor and got viral around India. after this big celebrity like virat kholi, varun dhawan, anuska sharma, shradha kapoor, rajkumar raav, vidhyut jamvat, randeep hooda gave their anger on twitter, facebook, youtube etc. politician cabinet minister praksh javedkar, menka gandhi give direction to Kerala government to take necessary action and find culprits. watch this whole story on youtube

@invkohli. appalled to hear about what happened in kerala. lets treat our animals with love and bring an end to these cowardly acts.

How???????? How can something like this happen ??? Do people not have hearts??? My heart has shattered and broken… The perpetrators need to be punished in the strictest way@petaindia @cmokerala

@vidyutjammval will this go on in the newworld post corona ??? she harmed no one, damaged nothing and yet| human being forget humanity while this elephant suffered for no reason. this is not an isolated case and we need to put a hard stop to this. this story kerala pregnant elephant died now viral

@randeephooda an act most #inhumane to will fully feed a pineapple full of fire crackers to friendly wild pregnant #elephant is just unacceptable .. strict action should be taken against the culprits sir @vijayanpinarayi @cmokerala @praksahjavedkar @moefcc @ntca_india ndtv.com

This is horrific @petaindia @cmokerala please take necessary action. we need to find these people and punish them.