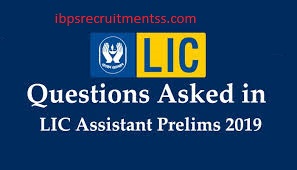 Lic assistant examination successfully conducted across the country. Question paper was easy as review by the appeared aspirants. here we are give memory based reasoning question paper of shift 1 held on 30 october 2019. check LIC ASSISTANT REASONING MEMORY BASED QUESTION PAPER 30.10.2019 .

Direction (1-5): Study the following information carefully and answer the questions given below: Eight persons P, Q, R, S, T, U, V and W are sitting around a circular table facing towards the center but not necessarily in the same order. V sits 3rd to the right of U. One person sits between R and V. T is neither an immediate neighbor of U nor V. Three persons sit between S and T. More than one person sit between S and R (either from the left or right). W sits 2nd to the left of

Q4. If all the persons are sitting in alphabetical order in clockwise direction from P, then find how many persons remains at the same position (excluding P)?

Q6. How many consonants in the above series are immediately preceded and immediately followed by symbols? (a) None (b) One (c) Two (d) Three (e) Four

Q10. How many numbers are there in the above series which are immediately followed by numbers and immediately preceded by vowels? (a) Four (b) Two (c) One (d) None (e) Five.

Direction (11-13): Study the following information carefully and answer the questions given below: There are eight members in a family P, Q, R, S, T, U, V and W of three generation in which three are married couples. Q is brother-in-law of S. T is grandson of R who is married to U. V is sister-in-law of W.T is married to W. Q has no siblings. V is sibling of T. P is child of U.S is the only son of R. S is unmarried. R is the male member of the family.

It is a not a 100% actual paper. there may be slightly variation but most of the questions are similar. it will help to candidates going to attend examination on 31th October 2019 shifts.

Q19. Statements: Only a few Bin are Bag. Some Cat are Bag. All Cat are Rat. Conclusions: I. All Bag being Bin is a possibility. I. Some Bag are not Rat.

Direction (26-30): Study the following information carefully and answer the questions given below: There are eight persons namely A, B, C, D, P, Q, R and S are living on four different floors of a building. Ground floor is numbered 1 and top floor is numbered 4. There are two flats on each floor- flat-1 and flat-2 from west to east such that flat 1 is west of flat 2. Flat-1 of second floor is exactly above flat-1 of first floor and other flats are placed in the same way.

Q31. Which of the following numbers will be obtained if the second digit of the lowest number is subtracted from the first digit of the largest number after subtracting one from each digit of each of the numbers? (a) 6 (b) 4 (c) 2 (d) 1 (e) 5

SOURCE: LIC offcicial site. AS THIS QUESTION PAPER SHARED BY ASPIRANTS ON ADD247. it is previous question paper held on saturday