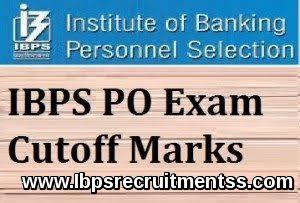 Here is cutoff marks for IBPS PO CUT OFF 2017 prelim out of 100 marks. For genral category.

Here is last 4 years IBPS PO CUT OFF MARKS 2013 TO 2016. Its important to study cutoff marks for any exam preparation.

The IBPS PO 2015 and 2016 Selection Procedure divided into three stages an online Prelim exam, an online Main exam and an Interview Round. While final selection is based on Mains and Interview marks alone, Prelims is qualifying exam essential to proceeding further. Competition is toughest at the Prelims stage. As seen below. IBPS PO CUT OFF is here .

The total marks allotted for Interview is 100. The minimum qualifying marks in interview will not be less than 40% (35% for SC/ST/OBC/PWD candidates ). The weightage (ratio) of IBPS PO 2016 CWE (Main exam) and interview will be 80:20 respectively. IBPS PO CUT OFF 2016 score for allotment of candidates would be arrived at on the basis of scores obtained by the candidates in the main exam and Interview. A candidate should qualify both the exam Main and interview and be scored enough marks for merit to be shortlisted for seats allotment process. 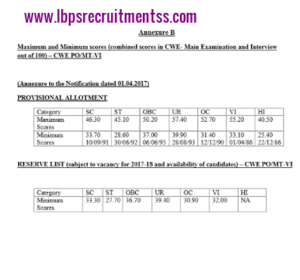