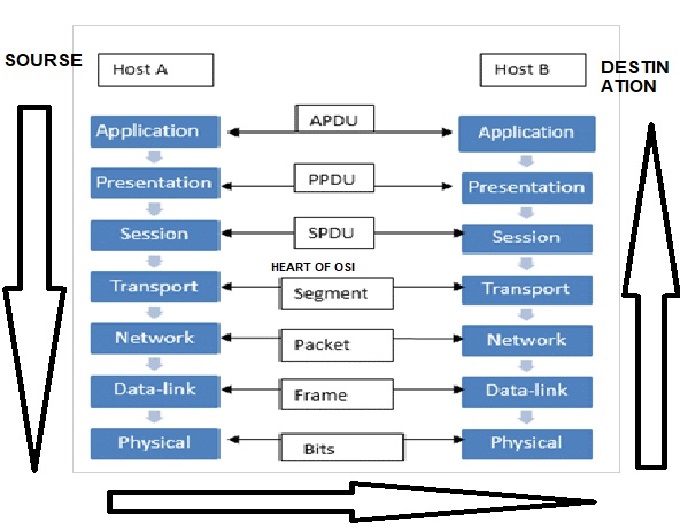 When we talk about network then first we think network security. Network security can be understood with the help of OSI reference model of 7 layers. each layer has its specific work to provide reliable communication between devices. here we EXPLAIN OSI LAYER WITH EXAMPLE . before exaplaining OSI model first we see internet, intranet, extranet. lets check.

NETWORK: A network is a collection of computers, servers, mainframes, network devices, peripherals, or other devices connected to one another to allow the sharing of data.

INTRANET: It is a private network within an organisation.

EXTRANET: It is extended version version of intranet with internet. It can be accesses by specific user like vendor, customer, suppliers etc. Outside the organisation.

To watch this lecture on you tube https://youtu.be/kIrDPldGDjc

OSI stands for Open System Interconnection(OSI) is a reference model that describes how information from a software application in one computer moves through a physical medium to the software application in another computer. it consists of seven layers, and each layer performs a particular network function. this model was developed by the International Organization for Standardization (ISO) in 1984, and it is now considered as an architectural model for the inter-computer communications.

OSI model divides the whole task into seven smaller and manageable tasks. Each layer is assigned a particular task.
Each layer is self-contained, so that task assigned to each layer can be performed independently.

All Characteristics of OSI Model:

Functions of the OSI 7 Layers:

There are the seven OSI layers. Each layer has different functions. A list of seven layers are given below:

Application Layer: it provide window for users and provide application for network service.
Presentation Layer: it act as a data translator, it is part of operating system and convert data one format to other. It provide encryption, decryption and compression.
Session Layer: generate session for communication like single or multiple session.

Network Layer: it provide routing service and determine best route, add source and destination address to the header of frame, collect segments from upper layer and convert into packets.
Data-Link Layer: it convert packet to frame and insert destination address into frames. it also control flow and error control.
Physical Layer: The main functionality of the physical layer is to transmit the individual bits from one node to another node. It is the lowest layer of the OSI model. It establishes, maintains and deactivates the physical connection.

AS we know first three layers(physical, data, transport) are network support layer. these layer use both hardware devices and software. But rest four layer use only software. all layers protocols and devices given here check it.